At aeris, we are committed to serving our customers with integrity and honesty. Unfortunately, not all companies follow the same high standards as we do. Recently, several air purification companies have claimed to be able to remove particles down to .003 microns, citing Brownian Motion as the reason. This is a much smaller size than the .1 microns that aeris purifiers are proven to be able to remove. While this may seem impressive, without recognized tests to prove these claims, what validity do they have?  Let’s take a closer look.

What is Brownian Motion?

In 1827, Scottish botanist, Robert Brown, observed that pollen grains move in random directions when placed in water.  Today, Brownian Motion is used to define the random zig-zag movement of small particles caused by collisions with other fast-moving particles.

While all the particles are constantly moving in Brownian Motion, they’re not all traveling at the same speed. Smaller particles absorb more momentum from collisions which makes them move much faster.

What does Brownian Motion have to do with air purifiers?

Imagine particles of different sizes flying around in the air inside of your house.  Each of these particles is measured in microns, which are one-millionth of a meter or 1/25,000th of an inch.

Some of the most common particles in homes are:

True HEPA air filters are 99.97% effective in capturing particles as small as 0.3 microns, which, as you can see, means that they should filter out all of the most common household pollutants.

Coronavirus particles are about .1 microns. That’s 30 times smaller than the United States Department of Energy’s (DOE) standard for what size particles HEPA filters should be able to trap. So, why would any air purifier company that uses HEPA filters claim to be able to filter out something that small?

That’s where Brownian motion comes in.

Think about those particles moving around in the air again. As air flows through the filter, the larger particles (larger than about 0.5 microns) are heavy enough that the airflow from the filter propels them forward into the fibers of the filter, where they get stuck.

But, the smaller particles, the ones under .3 microns, are so light that they don’t actually flow with the air.  In fact, if these tiny particles did fly straight, they would fit right through HEPA filters.

Instead, they bounce wildly off of other larger particles in the air in random patterns that send them careening off into different directions. It’s these zigzag patterns that cause them to hit the fibers of the HEPA filter and get stuck.

So, are the companies who claim that their purifiers can remove particles smaller than .3 microns telling the truth?

Perhaps, but that’s not the whole story…

But, without having air purifiers tested against national and international standards, it’s impossible to even determine if the purifiers use True HEPA filters. Without outside testing, any claims that these other purifier companies are making are done from inferences, not facts.

That’s just not good enough for us. Any claims that we make at aeris are based on real data from third-party labs. Not only do aeris purifiers meet AHAM standards, but we’ve also been tested by EN1822, which measures European standards and ISO18184, which determines how well our filter material reduces Coronavirus particles. So, when we say that our purifiers remove pollutants down to .1 microns, you can be certain that that’s exactly what they do.

How can I use this information to choose the best air purifier?

The pandemic has made us all even more aware of how important clean indoor air is to maintaining good health. As we’ve seen in hospitals, offices, and malls across the world, air purifiers can play an essential role in keeping indoor air as free of viruses and other pollutants as possible. Unfortunately, several air purifier companies have taken advantage of the health crisis to make baseless claims about what their purifiers can do, putting our entire community’s health at risk.

We take our role of providing clean air to our clients very seriously at aeris. We will never use gimmicks or false claims to promote our purifiers. Your health is just too important. That’s why every claim we make is backed by extensive research and testing.

With an aeris purifier you can be sure that your indoor air will be free of dust, pollen, mold, viruses, bacteria, and every other pollutant down to .1 microns in size. 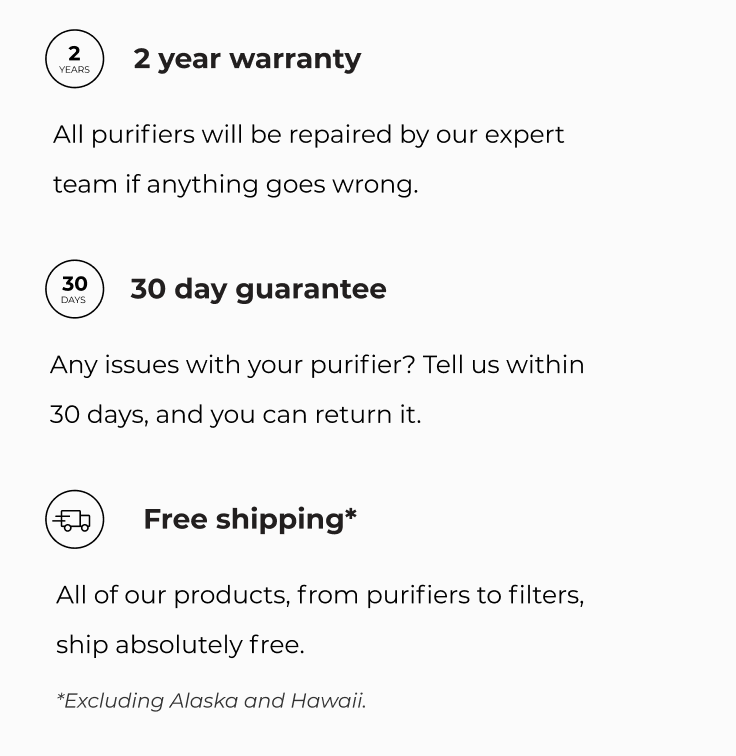